Middlesex was established as a University in 1992. It is now widely regarded as an excellent international provider of higher education with an outstanding academic credential and highly employable and successful graduates.

The history of Middlesex University began in the late 1880's, when two educational institutions opened their doors in north London – St Katherine’s College and the Hornsey School of Arts and Crafts. Both would become part of Middlesex Polytechnic, which was founded in 1973. Middlesex was awarded the title ‘University’ – by Royal Assent – in 1992. 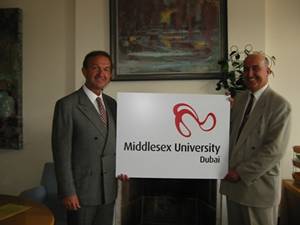 Misho Ravic, Co-Chairman of the Joint Board of Directors and Managing Director, Middlesex Associates and Dr. Terry Butland, Deputy Vice-Chancellor of Middlesex University and Director of Middlesex International after establishing the University Campus in Dubai 2005